on June 20, 2012
Here is Dsquared² fall/winter 2012/2013 advertising campaign. The ad is an ode to the 1960’s teen rebellion, highly influenced by Beatles mania and the youth culture of the era, that were breaking free from the cookie cutter values of the former generation.

The music is ‘The Clapping Song’ by Shirley Ellis, perfect for Dsquared²’s tough-in-cheek trademark.

Unknown said…
Dsquared is one of my favorite brands! It always provides something new and fresh. It is not afraid of different bold decisions and it attracts me. This ad campaign is not an exception. These clothes, accessories and shoes are great. Especially, their wonderful examples of fashion eyewear.
12:52 AM 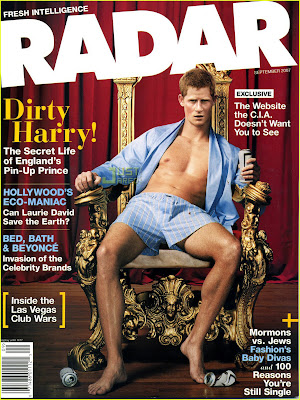 Prince Harry Shirtless on the cover of Radar

Is it bad to be really turned on by this cover? Here's Prince Harry wearing only boxer and robe in the September cover of Radar Magazine Source (Just Jared)