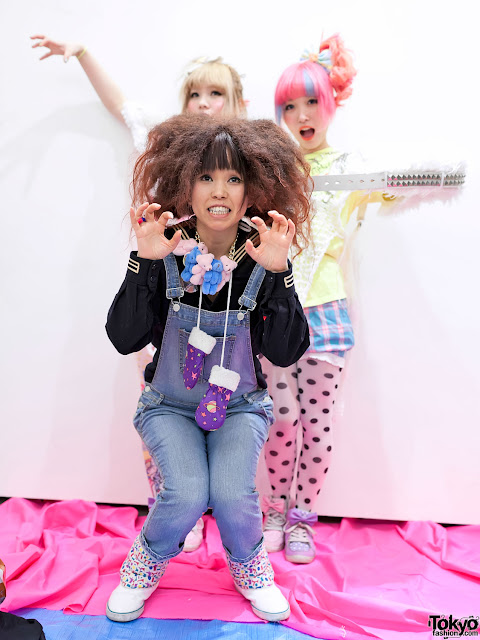 At first glance, Shojono Tomo might look like nothing more than an overgrown four year old – with her big messy hair, dungarees and necklace of blue and pink teddy bears.  Even her name translates as ‘friend of little girls’. Looks, however, can be deceptive as she is rapidly gaining global adoration for her colourful Harajuku-style fashion. Her style incorporates candy colours, ice creams, 80’s stripes, lips, huge bows, plastic jewellery, pink tassles – pretty much everything you’d want and expect from a zany Japanese fashion designer and more colour than a Carnival Legend Cruise. Not only are her clothes designs cute – she herself is a warm and playful character, ready to talk about the emotional side of her work with an openness which is hard not to find endearing.
An All Round Creative Spirit
Tomo once worked as a graphic designer and then turned her hand to freelance illustration in 1990. She is clearly a woman of many talents, having since worked on music projects, comics, art and fashion, even fortune telling for a TV station. Yet Tomo sees herself as an artist first and foremost, and uses her clothing designs as a kind of portable, walking canvas. She says that whilst you have to go to a gallery to see paintings, everyone wears clothes, so it is an excellent and highly accessible form of art.
Many of her fashion creations convey a clearly devised concept. Her name ‘Shojono Tomo’ started out as a joke which came about when she was working on a project called ‘Adult Children’, which was themed around the idea that many adults have the soul of a child which never grows old. The nickname stuck as she felt that the name expresses her spirit, and from the looks of her creations she’s certainly not wrong.
Rise To Fame 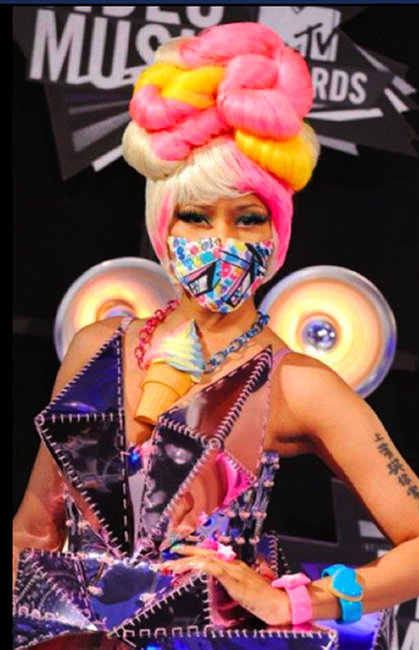 Her work received international attention last year as a result of hip hop star, Nicki Minaj becoming one her biggest fans. Minaj initially requested to wear a pair of Tomo’s leggings on Good Morning America, which Tomo was happy to send through her independent label ‘ENOCDOUTER’. Minaj then showed up to several major events donning the designer’s wares, and early this year Minaj even mentioned her in an Ester Dean song she featured on – 'Gimme Money':


Many of Minaj’s fans are now showing their love for Tomo, especially through Facebook, although in an interview she did for TokyoFashion.com she admits that she feels a little unsure whether they are really interested in her art and fashion, or whether their appreciation is only an extension of their love for Minaj: “I don’t know if it because they are Nicki’s fan’s," she says, "or because they like my clothes she wore. But they are so passionate. I really appreciate it.”

The Healing Powers of Fashion
In her interview, Tomo describes Minaj’s quite moving story of how she became interested in dressing up and playing with clothes: Minaj grew up with an alcoholic father, and her way of escapism was to imagine she was a princess so that she could deal with her difficulties within that fantasy context. It’s easy to see the results of these early motivators when you look at the eccentric, often fairy-tale-like manner in which Minaj now dresses, and also how one of her personalities is the ‘Harajuku Barbie’.  The story also brings a rather beautiful affirmation of Tomo’s nickname.