Male Love 101- The Story of Harmodius and his lover, Aristogiton

on February 10, 2007
Here is great story about homosexuality in militaries in Ancient Greece. 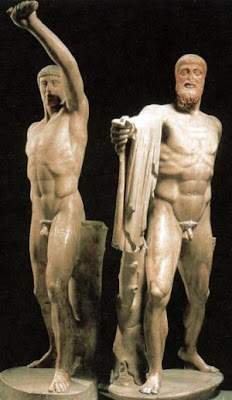 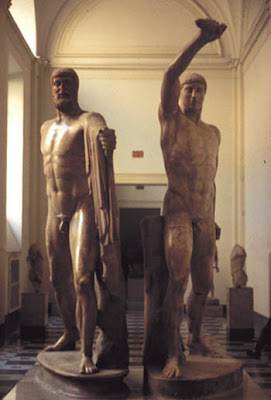 The story of the youth Harmodius and his lover, Aristogiton, is an old one, 2514 years old in the year 2000 to be exact. It is a true story, and it happened during the reign of Hippias, tyrant of Athens.

Hipparchus, brother of the tyrant, desired the handsome Harmodius and kept on making advances. Harmodius however, devoted to Aristogiton, was not interested and told Hipparchus off. Now Hipparchus was not used to rejection. He flew into a rage at both of the lovers, and mocked them before everyone at the festival, calling them wimps and weak women. Aristogiton vowed to avenge the insult, and gathered a band of close friends to plot the assassination of both brothers, oppressors hated by many in Athens, during the armed procession at the Panathenaia festival the next day.

The next morning on the Acropolis, where Hippias was receiving the procession, they noticed one of the other conspirators greet the tyrant in friendly fashion. Fearing that they had been betrayed they did not follow the plan laid out beforehand, but rushed down the hill into the city where they cornered Hipparchus as he was organizing the procession by the Leocoreion and slew him. However as they were alone young Harmodius was killed instantly by one of the bodyguards, and Aristogiton was captured. He was immediately taken away to be tortured to make him reveal the names of the other conspirators. Hippias himself was present in the torture chamber. Aristogiton, who refused to betray his friends, spat an insult at the tyrant. Hippias, in his fury, turned and stabbed Aristogiton to death on the spot.

After that Hippias ruled for four more years, and his rule was even harsher than before. But the Athenians forgave Aristogiton for spoiling the plot, and ever after honored the two lovers as saviours of the city. Their example was upheld as a model for the city's youth, and a statue of the two was comissioned by Cleisthenes, the founder of the democracy. When it was plundered by the Persian conquerors twenty five years later another one was cast, and a Roman copy of it survives to this very day in the national Museum in Naples.

This event, and many like it in which pairs of pederastic lovers slew other tyrants, caused the Greeks to say that it was only tyrants and barbarians (the latter because they are ashamed of nudity) who hate pederasty.

Plato on the strength of male sexual bonds in this case being used to overthrow a tyrant in Athens:

"Our own tyrants learned this lesson through bitter experience, when the love between Aristogiton and Harmodius grew so strong that it shattered their power. Wherever, therefore, it has been established that it is shameful to be involved in sexual relationships with men, this is due to evil on the part of the rulers, and to cowardice in the part of the governed."
#fashion #MODELS