An Interview with Gregory Capra 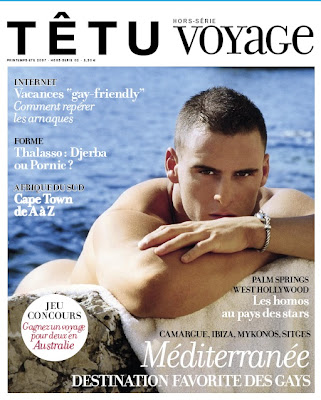 Gregory Capra the sexy model/personal trainer who was featured in many blogs including mine is the cover boy for the April’s Tetu Voyage magazine. I had chance to interview this very sweet and good looking guy.

Niwdenapolis: How was the photo shoot?

Gregory: The photo shoot was very pleasant. We did that in the South of France nearMarseille where I’m living during the week . It’s also very close to the collegewhere I studied sports. It's a very quiet place near the city.

Niwdenapolis: Who was the photographer for the cover?

Gregory: The photographer was Alexandre Roche.

N: This is the second time you were featured on Tetu, has any of your clients recognized and teased you about the first time you were in it? Or to put it another way, were there any clients that said they want you to be their personal trainer because they like your photos in the magazine?

G: The first time I was featured on Têtu I was at the beginning of my businessas a personal trainer so I must admit I have received some mails from people who saw me in the magazine and wanted me as their personal trainer. They became my clients, regular clients. This time it will be different !!!

G: I learned judo at the university and became very powerful in this sport because of my muscles I think but I am not a specialist in self defense and martial arts. For that I have in my team some colleagues not only into body building but also competing at an international level in judo and other martial arts like viet vo doa, karate, wrestling, jujitsu, … and freefight for fun !

N: You were featured a few times by an internationally famous "Oh La LaParis" Steph & Alek blog and other international blogs as well, do you have fans from all over the world e-mailing you and telling you how much they love you?

G: Yes I have a few fans from all over the world (USA, Canada, Singapore,Australia,…). Some of them even want to send me gift from their country liketee shirts,…They even can profit by my online advices with training program and diet.

N: How do you feel having a big gay fan base?

G: I like it. I feel good with gay people and straight people as well.