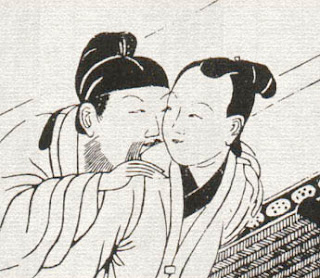 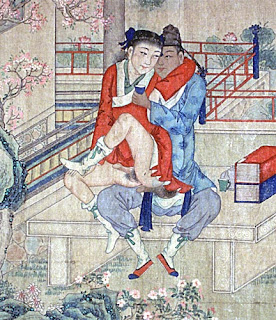 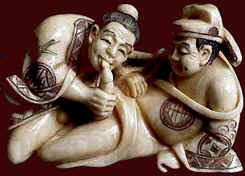 In ancient Chinese culture one of the terms for homosexuality is called the “the bitten peach” or “the pleasure of the bitten peach”. This term is dated back from Zhou Dynasty 200 BCE.

Here below the story of Mizi Xia that tells where the term originated.

Viscount Mizi, whose given name was Xia, was a favorite, and a Great Master, during the reign of the duke Ling of Wei: he was the lover of the duke. According to the law of the kingdom, the use of the duke’s carriage without permission was forbidden to all, upon pain of having one’s feet cut off. One time it happened that Mizi’s mother took gravely ill, and a breathless messenger came running to the palace in the middle of the night to bring him the news. He, without a second thought, jumped into the duke’s carriage and took off. When the duke found out, instead of punishing him he praised him, saying: “What a devoted son! For his mother he risks even losing his own feet!”

Another time, on a warm summer afternoon, he was strolling with the duke through the royal orchard. A beautiful peach on a low-lying branch caught his eye and he plucked it. Biting down on it he found it sweet, so he offered the rest to the duke. The duke, touched by the intimate gesture, said: “He loves me to the point of forgetting his own mouth and giving it to me!”

Later, the beauty of the viscount began to fade, and the duke’s love also waned. When the viscount was one time accused of a crime, the duke said: “That one once hijacked my carriage, and he even gave me a half-eaten peach to eat!” Mizi Xia had not done anything unusual. If the ruler was now accusing him of a crime instead of praising him like he used to, that was because the duke’s love had now turned to hate.

Ever since those days, when people in China speak of male love, one of the names they give it is “the pleasures of the bitten peach.”
Posted by niwdenapolis at 5:57 AM